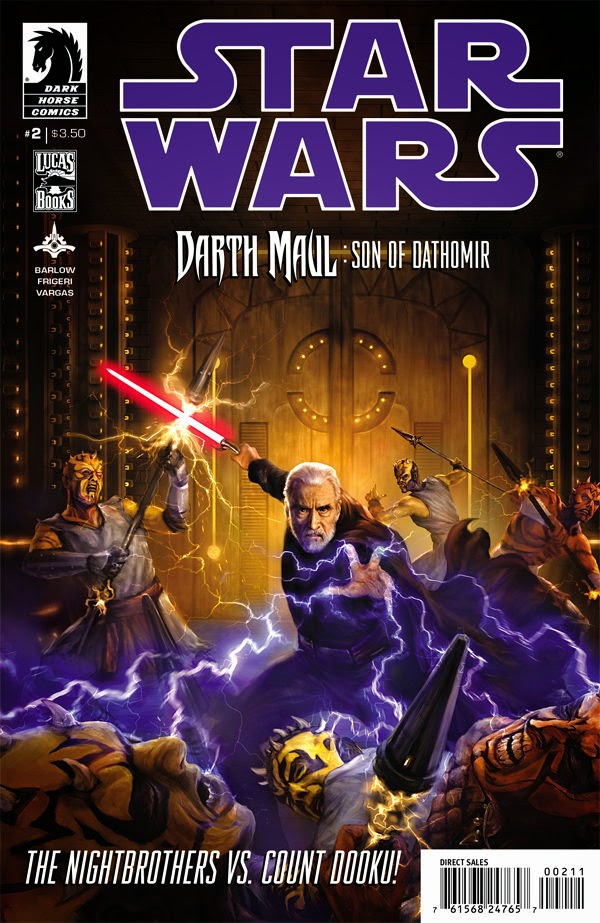 Son of Dathomir is a clash of dark side heavyweights. Darth Sidious sought in the first issue to lure Mother Talzin into the open, while in #2 she quickly deduces this and makes her own strategy. Dooku aims to defeat Talzin (whom he calls “an older and fouler creature” in some of the issue’s best dialogue.) General Grievous is along for the ride, but performs his usual act of single-mindedly deploying alternatively ominous and quippy droids.

It’s a fast-paced, tense story, and just a few panels make the Pykes more sympathetic than ever before.

Sometimes it’s too fast, though. The action, sometimes, reminiscent of "The Phantom Menace," is oddly paced at times, with text to indicate obvious cinematic time or scene skips. A two-page spread containing one word of dialogue is pretty but static, with obtrusive, repetitive sound effects. (Perhaps some space could have been given to the civilians of Ord Mantell, who are, in an issue set in a city, nonexistent.) Maul’s relationship with his Mandalorians isn’t deepened. Instead, it feels very similar to that of a Jedi general with their clone troopers.

Kast and Saxon are still merely minions following the Death Watch party line. Like in issue #1, some fights that seemed like they should be climactic were brief, in Grievous’ case particularly.

Maul and Talzin seen to have a much stronger relationship in this issue than even in "The Clone Wars," and I am curious to see the roots of it - whether she’s using him, whether he’s grateful to go back to being someone’s apprentice and attack dog. Issue #2 doesn’t want to tell us, though. The Nightbrother leader Viscus knew both of Maul’s brothers, but thus far there is no mention of that connection - just “There is no time for a briefing,” and Mandalorians standing together like toy soldiers.

Every character here has history with one another, but the comic focuses on their present, and therefore doesn’t get beyond the surface of a battle fought on neutral ground. I’m enjoying the series, but, like last issue, look forward to seeing #2 as a preface for something more.
Posted by Megan at 6:00 PM