A relaunch of the Star Wars adult fiction line published by Del Rey Books and Disney Publishing Group will begin in September.

Along with this comes the definitive ruling about the Expanded Universe, henceforth known as "Legends:"


In order to give maximum creative freedom to the filmmakers and also preserve an element of surprise and discovery for the audience, Star Wars Episodes VII-IX will not tell the same story told in the post-Return of the Jedi Expanded Universe. While the universe that readers knew is changing, it is not being discarded. Creators of new Star Wars entertainment have full access to the rich content of the Expanded Universe. For example, elements of the EU are included in Star Wars Rebels. The Inquisitor, the Imperial Security Bureau, and Sienar Fleet Systems are story elements in the new animated series, and all these ideas find their origins in roleplaying game material published in the 1980s.

"Legends" books will remain in print. 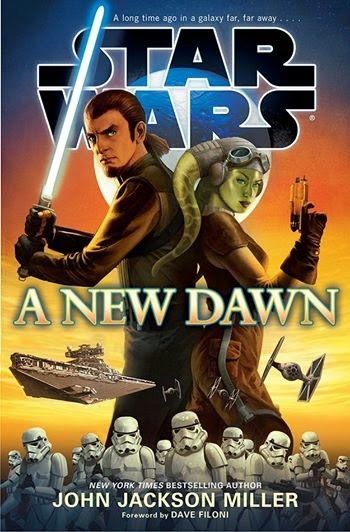 Three new adult novels were announced: "A New Dawn" by John Jackson Miller, "Tarkin" by James Luceno, and "Sith Lords" by Paul S. Kemp. The existent Luke Skywalker novel, "Heir to the Jedi" by Kevin Hearne will also still be coming. Covers for all of these can be seen at the Star Wars Books facebook page.

This explains why the "Empire and Rebellion" title was dropped from "Honor Among Thieves," the novel once supposed to be part of the now universe-spanning series. It also means that the Jaina Solo series "Sword of the Jedi," once indefinitely put on hold, has been cancelled.

I am sad, more than I want to be in a news post, but I have also been bracing for this. The novels were never "G-canon," the part of the Star Wars universe which had George Lucas' stamp of approval, even though fans often thought of them as such without question. I'm excited for "Heir to the Jedi" and "A New Dawn" particularly, as well as feeling pangs of possessiveness and a mild sort of mourning for the now-Legends. As other bloggers have said, the books are still on my shelves. Disney has not stolen them. It makes sense for the movies and books to exist in a cohesive timeline, but would have been prohibitive to try to fit the movies into rich, complicated existing timeline. I will continue to read and re-read, and look forward to whatever Del Rey and Disney has for the future.

The EU is dead. Long live the EU.