Every Day Above Ground: Darth Maul and Joe Schreiber 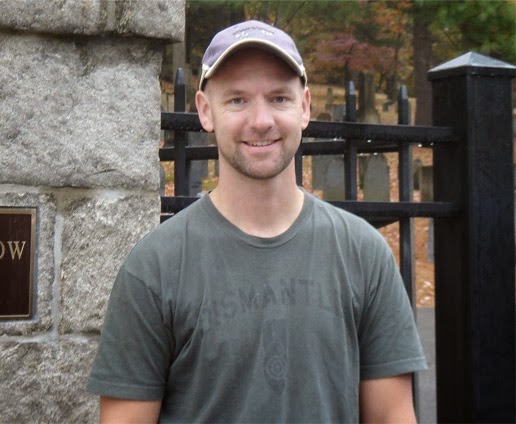 Horror writer Joe Schreiber takes on popular villain Darth Maul in Maul: Lockdown, a novel that Schreiber says draws inspiration from Jack Reacher and Scarface. Schreiber published his first Star Wars novel, Death Troopers, in 2009 and followed it with a prequel in 2010. He also writes original horror novels such as Eat the Dark and No Doors, No Windows. Now, he takes a young Darth Maul into a  diabolical prison where inmates fight gladiatorial battles.

Along with the action movies, there was another inspiration too, evident in Schreiber's Christian dedication. The themes that Christianity and Star Wars share - both redemption and the triumph of good and evil - are present in the book, even when the story is bleak. Schreiber sought to show Darth Maul as someone who never gives up.

I spoke to Schreiber over e-mail about the development of the novel, its ties to Darth Plagueis, and what makes Darth Maul tick.

What parts of Darth Maul’s characterization did you think were most important to get across in this novel?

Maul’s a fighter, but there’s a lot more to him than that. We know him as the guy who will do whatever’s necessary to survive and achieve his mission.  Since part of the challenge was that he can’t use the Force in the prison without revealing his identity, I wanted to focus on hardcore skills, discipline and training in an arena where there are no rules and anything goes. I really wanted to see him getting his hands dirty adapting to the prison environment, using every aspect of it to his advantage, to establish his prowess within Cog Hive Seven in a more traditional, sometimes brutal way.

I also thought it was important to show him as a silent and nonverbal presence among the inmates, one who expresses himself without using words -- like a predator among predators.  Like Lee Child’s character Jack Reacher, Maul can say everything that needs saying with a look.  And ultimately, when the situation seems hopeless and he’s been pushed beyond the outer boundaries of pain and defeat, I wanted to show him as a guy whose training and experiences have forged a gut-level inability to give up, no matter how bleak things are.

There are a lot of visceral, gory fight scenes in the book. What is your modus operandi for writing fights?

Keep it fresh and keep it moving.  I read somewhere that when George Lucas was directing Star Wars, his most common direction to the actors was, “Faster and more intense,” which isn’t a bad advice when you’re writing a fight scene. I try to avoid repeating myself.  Reading about one guy punching another guy in the face get boring fast -- and it really helps that in this story, I had access to just about any creature and species out there. In Cog Hive Seven, I wanted to change up the different opponents and fight environments so we could see Maul going head-to-head with some of the most well-known and deadliest inhabitants of the Star Wars sandbox, and follow it through to see how he’d survive. I actually tried to shy away from the gore, but I’m not sure how successful I was at that part of it!

I love writing strong female characters. It was always my intention to have the Warden of Cog Hive Seven be a woman -- that just made sense to me.  She’s a survivor, extremely smart and self-motivated, an opportunist in the best sense of the word, and she’s totally at home inside this hellhole that she’s created. The other female character, who appears in the second half of the novel, and whose identity I’m a bit reluctant to expose at this point, was a bit more of a challenge because I wanted to stay true to whatever we knew about her already -- there wasn’t a ton of information out there, but there was enough that I didn’t want to screw it up, and I had to consult a few Star Wars fans who were a lot smarter than me and get their advice before proceeding. In the end, I’ll just say it was a lot of fun having the opportunity to get inside her head.

Frank Parisi over at Del Rey told me that the book was originally set after the The Clone Wars, but then it was changed after the show was cancelled. He also mentioned that, after that change was made, Cog Hive Seven could be seen as the place where Maul learns to gather allies like he did in The Clone Wars. Did that change affect the way you wrote Maul or plotted the book out?

It changed a lot.  Writing a post-Clone Wars novel, of course, would have cast Maul in a very different light. That being said, we had a great time coming up with a version of Maul who was essentially Tony Montana in a kind of Star Wars version of Scarface -- a hard-fighting, ruthless, street-level predator who will stop at nothing on his way to the top, as he betrays his former allies and builds an empire of his own. There were some fun emails back and forth with lines from Scarface adapted to Maul, and I was a little disappointed when we had to change course, though in the end, it worked out great.

What is one thing about the connections between Lockdown and Darth Plagueis that fans might not know about?

There are tons of connections, both obvious and subtle.  While writing Lockdown, there was a period of several weeks where I was just reading and re-reading James Luceno’s excellent Darth Plagueis as well as listening to it on audio in my car, because he’s just got such an amazing grasp of voices of Plagueis and Palpatine and the tone of their conversations and complex relationship.  I knew that if I messed it up, readers would know it immediately -- it would just feel wrong.  And James handled all of that so well in his book.  He was also looped into the early conversations that Frank and I were having about what Palpatine’s role would be in the action, as well as Plagueis’, and his input was incredibly helpful during the outlining phase of Lockdown.