What can we learn from Han Solo about writing female characters? 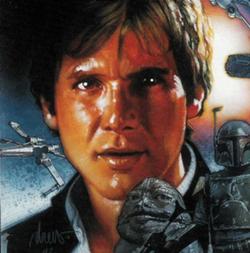 Let’s talk about genderbending for a moment.

If Han Solo was a woman, would I be calling her return in A New Hope to save Luke from Darth Vader, which was motivated in part by guilt, in part by conscious, and in part by love for Princess (Prince?) Leia, a lack of independence?

Theoretical female Han certainly has agency. (Tricia Barr recently discussed the difference between agency and independence in this post.) It would be her choice to turn the Millennium Falcon around.

I got on this train of thought after seeing this photoset. It's beautiful, inspiring, and creates a nostalgic twang - and it also expresses a completely impractical and not particularly feminist mindset. Luke in the beginning of A New Hope is a passive character. He got his adventure because he waited for Obi-Wan to arrive.

I always thought of Luke as an audience surrogate. He's certainly a George Lucas surrogate, but it worked well for teen me also - I never had trouble relating to Luke, despite the gender differences. I'd probably be just exactly as excitable and naive as he was if I was taken into space. But I’ve written before about how Luke is not a Strong Female Character.

Seeing the photos made me wonder which Star Wars character would be a better example of independence. Of course,Tricia and others have written extensively about Leia's strength, but it's always been hard for me personally to relate to her.

I thought: if Han was a woman, would I see her return to (Prince) Leia as a loss of independence?

I can't think of a woman who has gone through this arc without such loss - her attachment to her love interest is concretely tied to another loss (that of her independence as a smuggler) and she considers the two with the same weight. Her return to her love interest means the forfeiture of both. She goes on  to have her own plot points unrelated to her love (Jabba, Lando) and the two rescue each other and end up standing side by side at the end. For Han, the return to his love interest is not a loss of agency, as shown by the rest of the saga.

The Han/Leia story in the whole Original Trilogy shows what happens after Han’s big decision to turn around, whereas a female character's story often ends after their romantic decision.

In part, this common trait of women's stories can simply be attributed to the format of science fiction or fantasy movies, where the romance often happens at the very end. The woman is a "prize" for the men and the audience: her story does not continue because it has been completed and replaced by the hero. I would argue that Han's (first) romantic decision comes in the middle of the saga because a.) he's a man, and b.) it's a saga.

There are some women in science fiction whose stories break the mold and look more like Han's. Black Widow from The Avengers does, if you consider the scene where she talks to Hawkeye, after breaking him free of Loki’s spell, to be the the culmination of their romance. The two superheroes are seen together at the end of the movie in a scene similar to the group photo at the end of Return of the Jedi.

Leia’s loyalty to Han isn’t a loss of agency either, but because she doesn't make a romantic choice in A New Hope she isn't really the issue here. I feel bad about my dismissal of Leia, but permit me my thought exercise. This did lead me to notice, though, that it was the man (Han) in A New Hope who made a choice based on emotion. That's a nice change.

And of course, the ultimate lesson of this might be that we have to forgive female characters a little. Female fans tend to hate on female characters whether the characters are strong (Mary Sue!) or weak (damsel in distress!) This looks like a blanket statement, but I don't mean that either of those criticisms are useless. I've used less generic versions of them myself.

I really mean two things: We need more female characters like the theoretical lady Han, who can be romantic without becoming arm decoration for the hero. And sometimes we need to forgive lady characters for having the same flaws we love in male ones.
Posted by Megan at 1:05 PM