This November, HitFix's DrewMcWeeny wrote an article entitled 10 Star Wars Characters We'd Love To See Get Their Own Movies. McWeeny is an accomplished writer and penned some of my favorite critical reviews. His saga of watching Star Wars with his sons (in the best possible order) is a must-read.

Something about this list bothers me, though. In a universe that contains Padme and Leia, all ten people on the list are men. One is Salacious Crumb. One is a meme.

Admittedly, some of my choices are pretty unlikely too, but I'm hard pressed to figure out why someone thinks this would make a better movie than Leia.

So, I present to you, in a style shamelessly stolen and/or lovingly borrowed from McWeeny (he focused on the six core movies, not the Expanded Universe, but mentioned EU material if it helped flesh out a character) seven female Star Wars characters I would like to see get their own movies.


Who: Leia Organa Solo
From: 'A New Hope' 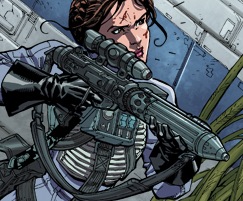 What I Would Like To See:   Leia is both a classic character and an emblem for kick-butt women. A movie could show off both her diplomatic skills and her willingness to fight either with a blaster or in an X-Wing (like in the upcoming Star Wars comic.) There are a lot of eras of her life to pick from depending on what kind of movie someone wanted to tell: a coming-of-age story mixed with slices of life from the galaxy far, far away if the movie was about her teenage years, a gritty war story about her work with the rebellion, or a sweet romance about her marriage to Han. (The latter would probably also be a gritty war story, of one sort or another.)

Who: Padmé Amidala
From: 'The Phantom Menace'

What I Would Like To See: Padmé has a combination of physical and mental skills just like Leia, but she's operating in the more corrupt, less black-and-white world of the prequels. She's also fighting her feelings for a man five years younger than her who grew up celibate, so there's that for the people who like Twilight I mean stories of unlikely love.  Padmé is one of the few prequel characters who hasn't gotten standalone novels dedicated to her, so I'm sure there are plenty of adventures in her years as queen and senator to craft a story of intrigue and adventure, with or without Anakin.

From: 'Attack of the Clones'
What I Would Like To See: Here's someone who also deserves a standalone story they haven't gotten: a fan favorite Jedi who could have just as many adventures as Anakin or Obi-Wan as well as bringing an alien hero to the big screen. She may not be my personal favorite character, but her brush with the dark side could add interesting flaws to her story in a movie. She has been treated pretty well in the comics in which she originated, and supporting characters like Quinlan Vos or Kit Fisto could also come along for the ride.

Who: Mon Mothma
From: 'Return of the Jedi'

What I Would Like To See: Let's step away from warriors for a moment to see the more matriarchal, tactical side of things. Mon Mothma was introduced in 'Return of the Jedi' as a leader of the Rebellion. Her gender is incidental: no one ever remarks upon her being a woman, and she isn't romantically involved. The Expanded Universe tells us that she was a senator who knew Leia's father and would been in government right in the middle of the transition from the Republic to the Empire. She could show the beginnings of the Rebellion, and get involved with Onderon, Starkiller, or neither.

Who: Aurra Sing
From: 'The Phantom Menace'
What I Would Like To See:  Aurra possesses the mysterious aura of Boba Fett plus an eerie beauty. Opposite from what happened with Aayla Secura, she was an extra in the Star Wars movies before she became well-known in comics. Aurra could explore the darker side of the galaxy far, far away, including bounty hunting and the vampiric Anzat. She also has a lot of females in her life, both friends and enemies.

Who: Luminara Unduli and Barriss Offee
From: 'Attack of the Clones'

What I Would Like To See:  Luminara and Barriss have been used in the Clone Wars era to show the more extreme mystical side of the Force, from the building of Barriss's lightsaber in the Genndy Tartakovsky Clone Wars short series to Luminara consigning Barriss to death by inaction in Dave Filoni's The Clone Wars. (Never forget.) McWeeny wrote that "Honestly, I just want a movie full of Jedis (sic) fighting bad guys", and I can't disagree. Along with explorations of Force philosophy and a mentor-student relationship that is enacted by but not tailored around the fact that both characters are female, Luminara and Barriss could bring some excellent swordfights to a movie.