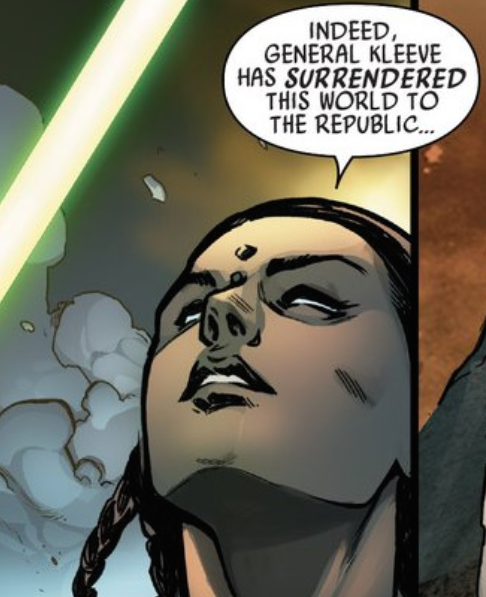 One of my favorite things about Star Wars stories is seeing Jedi enjoy themselves. A lot of Star Wars fans want to be Jedi, but real life for space wizards tends to be filled with a lot of war. Jedi have moral responsibility, but they also have exciting lives - and Star Wars: Kanan shows a Kanan Jarrus who appreciates that life. His happiness, and the moral qualms he feels about being at home in war, make Marvel's latest Star Wars series stand out.

The title is a bit misleading: we know from Rebels itself that Kanan isn't the last of the Jedi. Even without Legends characters like Jax Pavan skirting Order 66 left and right, Ahsoka still remains. Isn't she the last Padawan? She renounced the title when she left the Jedi Order, but her actions in that arc were more in line with the light side than Anakin's was, even if he didn't know it. It's hard to believe that more survivors won't be added to the new canon. Kanan isn't the last Padawan.

That aside, the comic gives us a good look at Caleb Dume, the apprentice most known for asking questions at the Jedi Temple. This fits nicely with his characterization in the prologue of A New Dawn, and also provides an interesting distinction between him and Jedi Master Depa Billaba. His Master questions the Jedi Order, but Kanan doesn't. Instead, he wants to ask questions in order to find out how the Jedi he views as superior came to their conclusions.

The comic does a good job of showing Kanan and Depa's closeness simply by the way they move, nearly-identical silhouettes working through lightsaber forms. Shatterpoint isn't canon, but the Depa of the comics isn't complete removed from the severe, slightly wild character in the novel, either. There's even a reference to an 'emergence' that could be interpreted as the coma she fell into in the novel.

I liked the clone troopers as well, primarily because of the art. They weren't perfect portrayals of the clones in the films, or even The Clone Wars. However, they had expressive faces that gave them a lot of character. The art had an elastic style with rich colors, and it was also cool to briefly see the Ghost crew in the same style.

I wish the story had gone a little slower; in a tale of transition, one wants to get to know both sides. However, a lot of groundwork has been laid for what could be a very exciting story, already peopled with personable clones, aloof aliens, and a Separatist leader who might also be in hot water. Kanan might not have many more chances to enjoy himself, but the reader might.
Posted by Megan at 9:19 AM