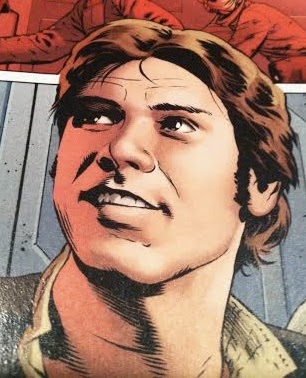 As a fan and a reviewer, it's sometimes easy for me to describe a Star Wars story based on what it doesn't do. Maybe it doesn't fall into the easy, common traps: doesn't bring back long-dead Sith Lords, doesn't call a rabbit a smeerp, doesn't have a largely male cast. It sometimes feels like, in all the checking off of the checklist of tired things Star Wars fans don't want our stories to do, we forget what they can be.

Other reviewers have said that the story is solid and energetic, that it's hard not to hear the characters' voices when reading. Those great voices are captured in the comic by repeating some vocabulary from the movies: Han calls C-3PO "Goldenrod," Luke breaks into a cell and introduces himself by full name. The tone and rhythm of the dialogue feel like classic Star Wars. Especially Han's characterization is spot on: he's prickly and egotistical as well as heroic.

Leia takes action as the leader of the squad, and it's startling how unusual that is. She overrides Han's orders, because of course she does - Han is the convenient face, but Leia is the core of the Rebellion. There is also, of course, this triumphant, oft-memed panel: 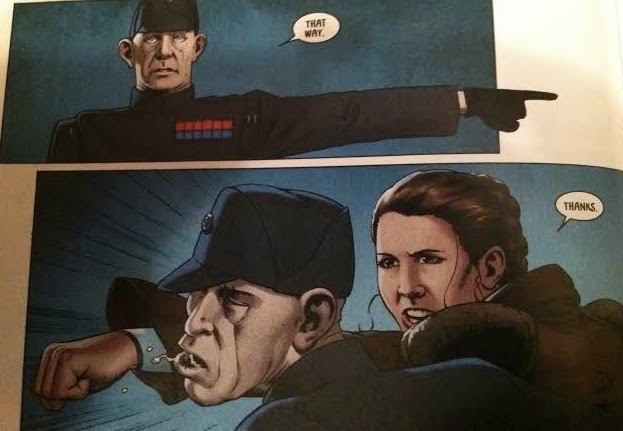 The art is vibrant and captures the characters well, especially Han. That's refreshing, since the Big Three sometimes became indistinguishable from side characters in past comics. (It makes a joke directed at Luke's "pretty face" work even better than it would otherwise, too.)

Then there's Vader being referred to as "the negotiator," a title which works within the story and then really hurts when one remembers that it was Obi-Wan's nickname during the Clone Wars.

The new canon Star Wars novels, A New Dawn and Tarkin, have both had their strengths. They don't fall into every trap, and have some great moments and great insights along the way. I'm primarily a prose reader, but it took a comic to make me flail about Star Wars this time.
Posted by Megan at 1:25 PM