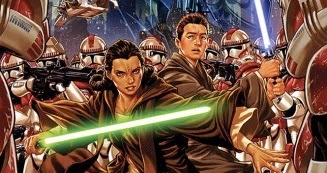 The Marvel comic "The Last Padawan," featuring Kanan Jarrus and Depa Billaba and starting in April, was the big Star Wars announcement at New York Comic-Con. The comic will be written by Greg Weisman, temporary executive producer on Rebels and the writer of six episodes.

Attendees at the Rebels panel on Saturday also got to view "Rise of the Old Masters," which will air on Monday, Oct. 27  and was previously shown at the ABC press screening in New York. Next week brings us episode 3, "Fighter Flight," currently available through the WATCH Disney XD app.

Disney also released a trailer for the first season of Rebels, which has a little bit of new material.

My review of "Droids in Distress" can be found here. In short, I thought the episode was good but not extraordinary, and almost felt like it belonged later in the season. (Perhaps after "Rise of the Old Masters.")

Shelly Shapiro announced that Palpatine's first name will be revealed in the novel "Tarkin." It has since been spotted in the Amazon excerpt for the book, so click or Google if you want to be spoiled. This name was originally chosen by George Lucas.

For me, the most moving part of the Star Wars panels was John Jackson Miller's response to a question about Legends.  The tension between Legends and canon, and how Rebels and the discussion of childishness got pulled into the mix, was clearly present at the con in general and the Del Rey panel in particular. Eric Geller wrote a thorough, sweeping post about the common talking points shortly before NYCC.

Miller, talking about the future of Star Wars books, likened it to the year before "A New Hope" - "This is 1976," he said.  I nearly cried happy tears, because I can imagine Star Wars stories continuing for 30 years and more - and for me, no matter the level of canon, that's ideal.

I think until the new canon starts expanding beyond the six movies I'll still feel sort of constantly surprised by the Legends decision; I forget it that happened, and simply assume that characters like Jax Pavan and Scout exist alongside Kanan Jarrus (thus my mixed feelings about the title "The Last Padawan.")

Although am still hoping for more female creators and female characters, after Comic-Con I feel very optimistic about the future of Star Wars.
Posted by Megan at 7:41 PM