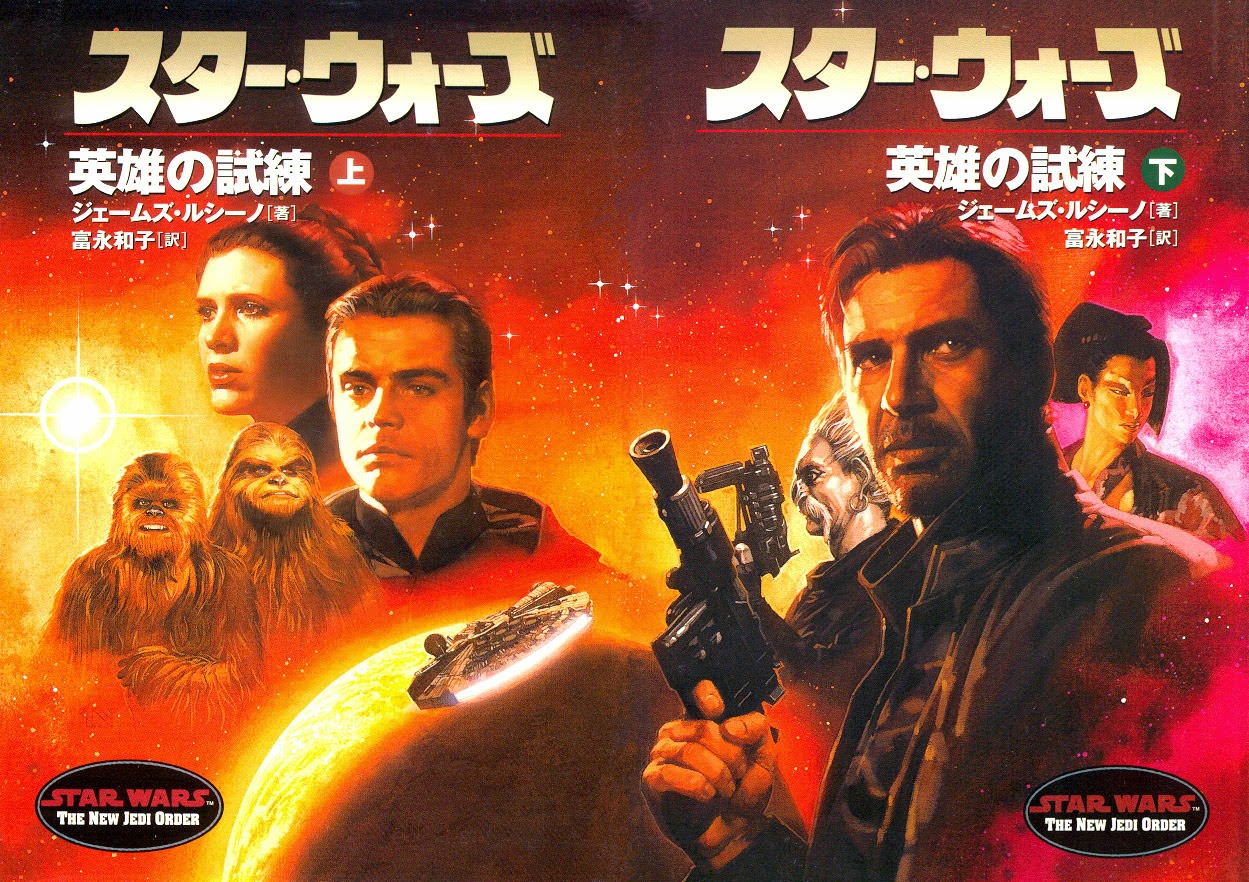 The New Jedi Order was my first passion in Star Wars literature. Soon after seeing the movies for the first time, I got caught up in this ongoing story about Jedi fighting aliens. About ten years later I’m re-reading the series with a fresh perspective.

Four books into the New Jedi Order, Han Solo is finally dealing with the death of Chewbacca - in unhealthy ways. The timing for me seems perfect, since as an EU fan I’ve continued my own sort of mourning after the rumor that Chewbacca may be alive in Episode VII.

"Hero’s Trial" is the first of James Luceno’s three New Jedi Order books, and in fact his first Star Wars novel. He will return much later to finish the series with "The Unifying Force," and go on to write the popular "Darth Plagueis," among others.

This novel is very much a Han Solo story, although this means that it must also be a Leia story and an Anakin Solo story as well. In addition, Mara Jade encounters a turning point in her life  toward the end of the novel, but the majority is the tale of a Han who is running from a past of which he is also in denial. By the end he accepts the past, but cannot stop running from it.


His grief at the death of Chewbacca is understandably enduring, and Han digs himself deeper into that hole as he snaps at his children for their attempts to console him. He feels unusually sensitive about a perceived rift between himself and the Jedi, which was an interesting through-line for a character usually perfectly content to go through life without a “hokey religion.”

I wear my love for Force users on my sleeve, though, and tagging along with Han was a bit of a slow ride until the arrival of Droma. The Ryn is less subtle than I remember from reading the New Jedi Order in high school - his species is a mashup of stereotypes, and  having him literally finish Han’s sentences is a pretty obvious way to say that Droma is supposed to be less a replacement for Chewbacca and more a replacement for Han. Despite their different backgrounds, Droma is a fellow fast-talking traveler, and Han can bounce ideas off of him with relative certainty that both of them will agree on something. Droma is comical and charismatic enough that I look forward to seeing more of him, though.

The prose in “Hero’s Trial” ranges from cuttingly observant to dully encyclopedic, and Luceno’s tendency to infodump sometimes provides meaningful backstory for a scene, but sometimes feels like a misplaced Wookieepedia entry.

A description of eight New Republic leaders reads like a parody of the Star Wars universe - seven of the leaders are male, and the one female is described as first pretty and then married. There are various other female characters, though, including New Republic techs and scientists. The Yuuzhan Vong priestess has a brief but important role, and I was almost certain she would come to a different fate at the end than she did. The novel also introduces the pivotal Vergere, who will later bring some of the most interesting philosophical arguments in the New Jedi Order. Here, as with the Peace Brigade, Vergere’s first scenes are quieter than her later importance might lead a re-reader to expect.

I wish that Han could have made nicer with Leia before he left to travel the galaxy with Droma. Even after coming to terms with Chewbacca’s death and Anakin’s role in it he is still cold to Leia, and his departure at the end of the novel for further adventures feels selfish after what he has learned. Han’s lesson in the Original Trilogy was to remain loyal to the people around him, and so his return to his wandering ways feels like a step backward. Chewbacca’s death was designed to shake up the galaxy, but I’m not entirely looking forward to following the ex-smuggler's angst into another book.
Posted by Megan at 8:15 AM