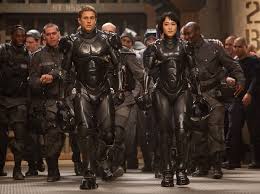 Pacific Rim has beautiful moments of stillness in gargantuan battles. It takes breaks from rollicking fight scenes to show the back of a robot’s foot, a person looking around, or an office desk. It’s the perfect concept movie that knows exactly what it is: giant robots fighting giant monsters. Of course there also have to be characters, and director Guillermo Del Toro received good press on the internet for showing a diverse cast in this original science fiction movie.

The movie does have diversity, although more so at the beginning than the end. The one female lead, Mako Mori, was certainly an improvement over the Megan Fox eye-candy type of character. Reviews have been all over the spectrum in terms of how to define her. A lot of reviewers - not just fan fic writers - are talking about whether or not she and leading man Raleigh Beckett had a romantic relationship or not, and each response seems to tell more about what the reviewer sees and wants than about the film.

I didn’t dwell on that much. There are more interesting concepts in the movie than the romance-or-not. I’d rather talk about the different ways in which mind-melding, called in the Pacific Rim universe “drifting”, is used. Although it’s ostensibly a science, it works like magic. I remember that one of the first rules of writing fantasy that I ever read was that magic must have a price, and drifting takes a toll on its users. The jaeger pilots might find themselves mentally or physically scarred, irradiated, or targeted by monsters. The pure variety of different teams of pilots and the resulting problems and drift techniques were fantastic.
The scenes are paced well, with some human and character moments in among the action.

I can’t help but talk about Mako, though, a woman of color in a lead role that is almost - almost - empowering.

Rinko Kikuchi plays a character who could have come off as very cold, but makes her both vulnerable and capable instead. She smiles at her victories, cries at her defeats, peeks in on Raleigh Beckett (Charlie Hunnam) shirtless, and adheres to her Japanese code of respect and revenge. She has an excellent scene of triumph and is powerful in battle. She follows tradition without becoming a stereotype.

While I felt that, in Star Wars, Princess Leia was an adult figure to Luke’s teenager, Mako comes off as a childish person next to the others in a way that defines but does not belittle her.  Her relationship with her father figure is a refreshingly positive one: she doesn’t always agree with him but highly respects him, and her story is not one of overcoming her parent.

She shows flaws, too, when she pilots a jaeger for the first time (and nearly shoots everyone). She’s critiqued for being a rookie.

She felt a little inhuman when she pointed out that she had perfect scores in test runs, and I saw the twist about her relationship to Stacker coming from miles away. If the story had ended with the fight in the middle of the movie, I would have been ecstatic about her.

But Mako’s triumph at the middle is not repeated at the end, and I would have liked her to be more involved there. Among many amusing supporting characters, there is only one woman (who is married). Sci-fi movies are still not a place for single, non-evil ladies to stay single.  (Do I think the Raleigh/Mako relationship was romantic? Sortof.) But the movie was rollicking and intense, with an emotionally engaging story. From the first scene, you know that in this world of robots vs. monsters, humans - both pilots and civilians - will always be important too. By creating a cast made up largely of siblings and being sure to show the civilian population in a sympathetic way, Del Toro ensures that there will always be an emotional hook along with the action. For a fangirl who likes both, the movie is a cut above the rest.

The male lead, Raleigh, is made interesting more by his circumstances than his character. He’s charismatic, but his emotional arc really ends much earlier than the movie does, in a powerful scene for both himself and Mako that was one of the best in the movie. Both characters fall apart and wrestle with their psyches while effectively becoming one being. Raleigh is a vessel for plot at the end, and is heroic but in expected ways, and I would have liked a little more about the unique toll the drift took on him. On the other hand, the movie was about the erasure of his scars.

The soundtrack is understated and contributes to the quirky feel of some of the scenes. The movie isn’t self-important, and felt like it was backed by a small orchestra, which was a good thing.

My only other critique are that the action scenes are beautiful but sometimes murky - do the monsters always have to attack in the rain?

All in all, Pacific Rim was a blast. Idris Elba plays an inspiring, charismatic leader, and other supporting characters provide humor and flesh out the post-kaiju world. I went in expecting to set my feminist mind aside and instead found that Mako was in ways more complex than just a good character or a bad character. Distracted by the staff fights and robot fights and realistic-looking battles I didn’t so much set that mind aside as embrace the rest of the movie. It is a monster movie that feels realistic without being heavy, and fantastical without being light. I went in with a lot of expectations, and wasn’t disappointed.

Addendum: I found this gem, a podcast where the screenwriter for Pacific Rim, Travis Beacham, talks about movies with Star Wars fans, on Full of Sith.