The Clone Wars: Bound for Rescue

“Bound for Rescue” takes place around Florrum, the planet we’ve seen Hondo Ohnaka use as his headquarters before. While the younglings and Ahsoka both try to escape what Hondo has inflicted upon them, Obi-Wan and Commander Cody are part of a Republic fleet under attack by Separatists. Their subplot served the dual purpose of both being entertaining and explaining why the nearest adult Jedi can’t help out the younglings. It was nice to see The Clone Wars juggle multiple plot lines, even if it didn’t weave them together – although maybe the juggling metaphor is especially appropriate for an episode featuring a circus.

Before their adventure on Florrum, the youngling experienced a quiet majesty in the scene where they built their lightsabers without Huyang’s help. The music was smooth, slightly eerie, and reminiscent of the binary sunset/Force theme. The younglings are falling into established roles that are consistent with their previous characterization and help us to learn more about them: Petro the leader, Ganodi the pilot, and Zatt the mechanic. Byph and Gungi follow Petro’s lead, while Katooni, perhaps still remembering that he left her stuck behind a wall of ice, is usually the voice of dissent. The females have just as much characterization and face time as the males. 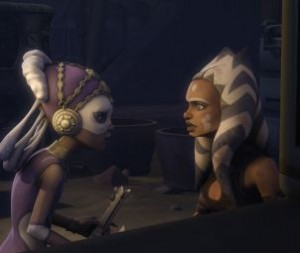 Any attempt to make Hondo morally ambiguous is gone in the first few minutes of a scene where he cruelly teases a captured Ahsoka and revels in his success. Hondo notes that his buyer is especially interested in a female Jedi, but Ahsoka isn’t scared. For girls she’s a great example of not letting what other people say – about either her gender or her fate – sway her determination.

Again I like that she’s put in more in the role of a Jedi Knight than a Padawan. It gives her more room to grow on her own, and she doesn’t come off as such a prodigy when we’ve seen that she has four seasons of experience behind her. We don’t learn the identity of the prospective and presumably lecherous buyer.

This episode also featured some gorgeous space battle scenes, with fiery and smoky explosions. The battle is full of dialogue about tactics that feel like classic Star Wars, and it’s nice to actually see clones in The Clone Wars again. Grievous hams it up with an evil laugh, and some of his kills were both violent and satisfying. The battle was big, chaotic, and frightening. It’s one of the first times where I’ve thought The Clone Wars lived up to and captured the feel of the movies, in this case, Episode III especially.

The space battle is then set aside in favor of the younglings, who find a new cast of characters when they use their Jedi acrobatics to join a traveling circus. The troupe has a great variety of characters. I’m partial to the Dug with the elaborate mustache, but there’s also a Togruta – they’re getting good use out of those models – and a variety of animals. The costumes are visually arresting and tribal, too peppered with interesting details like Byph’s handfuls of flowers or Petro’s predatory mask to be silly. There were some great images in this episode, mostly around the circus: Hondo hugging the nose of the big reptilian creature the circus uses in the place of an elephant, or Aleena performers juggling balls against a drum to make a beat. A very drunken Hondo provides some comic relief and also some black humor, as one of his minions holds up the skull of a performer who displeased him.

A few Twi’lek dancers make an appearance to help the younglings dispatch Hondo, and I wondered whether they had discussed this with the younglings beforehand or if coercing unwilling audience participants was just part of their job. If they were part of the plan it would bring the instances of female heroism up to four, as it’s Katooni who rescues Ahsoka, who leads the rest of the younglings out. Katooni still hasn’t completed her lightsaber, and I’m hoping that she instead of Petro will take the spotlight in the final episode of the arc. Petro’s impatience, still firmly present even after his trial on Ilum, could still be addressed some more next week, and Huyang is still knocked out under the care of Artoo.

This arc has been notable for having more gravitas than most, and that’s despite featuring Hondo, six children, and a circus. In part it has achieved this by playing all three as world-building elements instead of jokes, and it’s been fun to see Jedi training, the pirate life, and in-universe entertainers. The Young Jedi arc is bringing The Clone Wars to surprising levels of maturity.
Posted by Megan at 1:33 PM