The Clone Wars: A War On Two Fronts

“A War on Two Fronts” begins with the question of whether Jedi should use fear as an asset and moves into the story of a fledgling rebellion on Onderon, starting a new arc unconnected to last week’s Darth Maul story.

The Council scene is brief but thematically important, and gives some background for the Jedi that is missing for the rebels. Anakin thinks that arming a rebel group as a new weapon against the Seperatists could be “great.”, Yoda, for whom “war does not make one great,” is skeptical. He’s outvoted, though, and the Council sends the brash Knight, along with Ahsoka, to Onderon. Obi-Wan going along only serves to mollify Yoda slightly. This question of Jedi possibly “funding terrorists,” or doing bad things to win the war, is central to The Clone Wars. It’s nice to see this theme reinforced here. Even though this is a multi-part arc, the Jedi’s moral high ground is brought up again toward the end of the episode, and worked as a nice, if brief, framing device.

One aspect of this episode that I thought was also notable, although not especially sensational, is that Jedi cloaks are actually useful for disguise, and Ahsoka dons one along with the boys.

The rebels are a small group of humans with some nicely detailed and textured armor and astoundingly cute Avatar-style creatures. They are led by siblings Saw and Steela Gerrerra. Steela, the new female character glimpsed in the trailers, has a great character design, with fierce eyes and stylized hair. She’s introduced affectionately punching her brother. Without backstory as to how and why they joined the rebellion, though, the two are a bit hollow. I would have liked to know more about their specific motivations.

It’s a beautiful episode, with lively backgrounds that often contain an animal or a person not directly related to the main characters. I like the textures – both the rebels’ and Rex’s armor is dirty – and the complexity of Lux’s armor, which seems to incorporate strips of torn cloth as well as neon lights.


“A War on Two Fronts” did a good job simulating daring camera moves. In one of the few training scenes in a show about Jedi and warriors, Ahsoka neatly explains how droid tank pilots operate in tandem. There’s a nice cutaway to the same kind of tank coming into the city alongside a reptilian mount. Some other cool uses of the camera include when three probe droids hover close to the screen, and when the camera follows Lux’s slowly thrown grenade.

The majority of the action takes place on Onderon, which I first experienced in Knights of the Old Republic II.  It’s also associate with Lux, who picks up his relationship with Ahsoka where they left off: sharing significant stares. The last time she saw him he was escaping through an airlock instead of staying with her, although she doesn’t seem to find this noteworthy. Since she’s also forgotten what planet his mother represented in the Senate, maybe she’s just having a bad memory day.

Star Wars.com released a short behind-the-scenes video called “Clone Wars: Downloads” this week, in which Ashley Eckstein talked about how Ahsoka has developed, which was particularly relevant as she taught people to fight while posturing around Lux. Eckstein pointed out that Ahsoka is being sent on more missions by herself. This responsibility Anakin gives her is a sign that he has grown to trust her over the last four seasons, after she worked on solo missions and learned lessons. She’s not a static character. I still believe that she walks a balance beam between two powerful and too bland without ever meeting at a happy medium in between, but it’s nice to see her doing more than following Anakin into diners.

This is an episode filled with flawed people and combinations of characters instead of focusing on established pairs. Neither Saw nor Steela catch on to the Jedi’s teachings quickly. Lux isn’t a particularly skilled teacher either. I’m wondering where Anakin and Obi-Wan, both of whom have actual teaching experience, went, but they’re probably focusing on groups instead of the leaders who learn better as individuals.

The rebels seem mad about everything, with Steela shooting a look of anger and then understanding at Ahsoka as Lux becomes the only rebel to pass the droideka test. She switches tacks rapidly again when Ahsoka tries to reassure her. Maybe it’s rebel machismo, because Saw treats Lux the same prickly way in the beginning of the episode. Ahsoka then becomes the kid paired up with the awkward dude in gym class when Saw offers to practice with her and Lux walks off with Steela. The first conversation between Ahsoka and Steela remains focused on Lux, but their second conversation does pass the Bechdel test, as they talk about the grenade-throwing exercise.

I like that Ahsoka stresses perseverance over her innate Force ability. The rebel leader insists that “I’m not feeling down. I just know what I’m good at.” I would have liked to see Ahsoka’s response. Steela’s dialogue makes for a fierce transition, a verbal cliffhanger, but illuminates a only little more about her than we already saw: she doesn’t like to lose, but isn’t distressed when she loses at something that she doesn’t consider her specialty. Whether these ideas will combine into a lesson by the end of the arc is yet to be seen.

Just as Ahsoka starts to sound like a Jedi Master as she teaches Steela about shooting droids, she switches back to angry when Steela gets good at it, and there’s a hint of a rivalry over Lux again. The lesson here seems to be that attachment leads to lack of focus, and it’s illustrated pretty well as Anakin chides Ahsoka.

The last third of the episode starts with a nice surprising moment where functioning droids come from right behind the pieces the rebels were using for target practice. Now Anakin and Obi-Wan show their talents at last. They also tell the rebels to do the one thing they hadn’t practiced for – retreat – and Steela justifiably doesn’t listen. 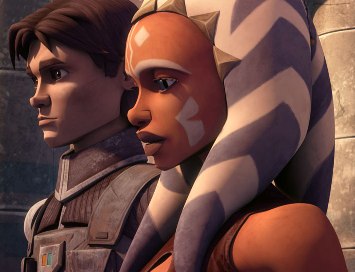 There was a lot going on in “A War on Two Fronts,” but for an episode that reunited Ahsoka and Lux romance wasn’t touched upon much. The Clone Wars takes a rather odd look at adult relationships, from the sterility of Ahsoka getting jealous of Lux teaching the rebel leader to throw, to her sidelong “Maybe a good politician needs to get dirty now and then.” It seems like innuendo is okay, but the show as a whole is awkward with anything else, restricting relationships to glances. (Considering that the only romance in the prequels is between Anakin and Padmé, maybe that’s intentional.) With the brutal violence of the previous Maul episode and the straightforward reference to terrorism at the start of this one, there’s an odd coyness to the romance by comparison.

It’s also worth noting that Ahsoka and Lux look significantly younger than Saw and Steela, although Lux and Steela are about the same height. No one questions children being jealous of adults, or using children in warfare or politics.

The small conflict between Anakin and Yoda hasn’t reached a definitive conclusion yet, but we have upcoming episodes to sort that out. For now, “A War on Two Fronts” introduces some notable new characters and environs, then tiptoes around most of their interactions. It was nice to see Lux and Saw resolve their conflict, a scene which also served to bring the team together as a whole before their final mission. All the puzzle pieces – rebellious Anakin, observant Obi-Wan, quizzical Ahsoka, and Lux and the rebel leaders with their more nebulous personalities – are in place, and the next few episodes will show whether they all come together.
Posted by Megan at 5:16 PM