Fighting Because I Can't Win


A love letter for CT

My favorite show recently has been Red vs Blue, a machinima series that features, among other things, a varied group of female characters. It's part comedy, part sci-fi adventure, and pretty much one large piece of fan fiction.

This is CT. She's been referred to by show writer Matt Hullum as "one of the most complex characters" on the show. I've spent a lot of time mulling over why exactly I like her so much, what it is beyond the need to identify with a character that draws  me to her. (Some of that time has been on the frenetic dashboards of tumblr, where capslocked nonsense reigns over and sometimes expresses more than organized words.) I think I've figured it out. Besides CT's surroundings, this farce-turned-space-opera that is Red vs Blue, the other thing I love about her is the way she fits into an ensemble of characters who are motivated by their desire to either win fights or stick together. CT's motivation is an outlier, and one that goes deeper than most franchise fiction.

She’s motivated by fear. Before Star Wars fans start quoting mantras at me, let me explain: CT is ranked as the least powerful soldier in her group. She admits that she “dropped the ball” in a mission we don’t see, one of many victims of the show’s format. It’s implied that she started investigating a corrupt program not out of valor, but because she wasn’t succeeding inside that program. It makes a whole plot point out of what what seeing oneself as a loser does to a person, and it makes CT one of the most complex characters in the show. I would go so far to say that she portrays negative self-esteem in a positive light, but she also works to get out of the life situation that creates that negative emotion.

Her voice is provided by Texan actress Samantha Ireland, who can make CT hunched and quiet or ready for a battle cry, almost crying or taking the initiative in a dangerous situation.

While CT is specifically stated to be “not the best agent” and feels many consequences of that position, she still excels in fight scenes, and clearly has weapons specialties that help her against the program’s top agents. She holds her own in knife fights and gun fights. She can be admirable as a fighter, and also as a thinker: she's observant and gets her points across quickly. 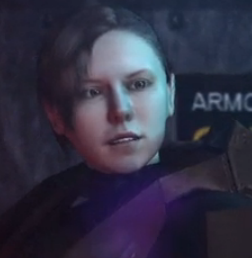 She’s got all the traits of a strong female character (TM) who stands up for her beliefs when no one else will. She’s smart, hiding from a military-grade security system. She’s also snappish, paranoid, afraid of being perceived as a child, and has conflicting feelings about the ways she’s separating herself from her friends in order to help them, all of which is expressed in a three-minute scene.

Note that these are all non-gendered traits: she's not set aside because she's a woman, for good or for ill. Her fear is something many young people can identify with and she just happens to be a woman experiencing it.

She does help the show barely pass the Bechdel test, with a "Us girls gotta stick together, right?" which is a bit too gendered for my taste but does serve to drive an emotional stake into multiple scenes later.

With the flashback seasons coming to a close we're unlikely to see much more of CT, but for now I'd like to extend my thanks to the cast and crew of Red vs Blue for making a serious character who doesn't fall into a stereotype.

In part I love CT because I can identify with her. She's a scared woman in a big world who nevertheless manages to go above and beyond, and sometimes gets nothing for it but in the end serves a larger purpose. Her dialogue is efficient and pointed. She's hyper-aware of what's going on in her world to the point that it almost seems she might be staring out of the screen at you. This sense of reflective realism drew me to her and it helps me remember the quality characterizations that drew me to the more serious latter half of this very silly web series.

Fan works and complex female characters are pretty much my two favorite things, and CT being both catapulted her to the top of my list of favorite characters this year.