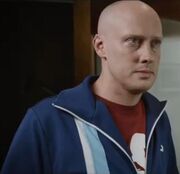 This is Shannon McCormick, a voice actor and improv comedian best known for Red vs Blue and Project Rant.  I spoke to him in an email interview about fandom, Jedi, Agent Washington, and being in the right place at the right time.

Megan: How did you get started working for RoosterTeeth?

Shannon: It’s a story of mostly being in the right place at the right time. Basically, the upshot is Paul Marino, an early champion of RvB and machinima in general, had hooked up the RoosterTeeth guys with Asaf Ronen, who now plays the Counselor. At the time, Asaf was doing some freelance graphic design for them, and they were looking for recommendations for new voice talent when casting Recovery One. Asaf’s a big improv guy in town, in fact he moved to Austin after we brought him in for the Out of Bounds Comedy Festival, which I used to produce. He had such a great time he decided to move here. Anyway, the RT guys were looking for voice talent, and Asaf recommended me and Shana, who plays South, along some other improv people in town. Shana and I are in a duo called Get Up, and we have a long history of playing together. I don’t know if the other people that they had audition for Wash were paired up with potential Souths, but the fact that Shana and I auditioned together really helped both of our auditions since we’re so comfortable playing with each other. We’ve joked about it before, but we’ve killed each other countless times on stage, so the Wash/South dynamic wasn’t too much of a stretch. They liked what I did with Wash in the audition, and I’ve just been really lucky that he’s turned out to be such a central character in RvB since his introduction.

M: How did you go about creating a unique voice for Wash? Burnie Burns had stated on a DVD commentary that Clint Eastwood was part of the inspiration for the character.

SM: It’s been so long since I first created him that I don’t even remember the initial inspiration. Wash has gotten a lot more complex since he was first introduced, so there’s a lot I’ve forgotten. I do tend to create voices by thinking of various other iconic voices and playing around with them, so I’m sure Burnie mentioned Eastwood and probably some others when I started. Initially I think I was just trying to sound as no-nonsense and hardass as possible within my own speaking register. Of all the characters I’ve done in various media, Wash is probably closest to my own speaking voice. At this point he’s pretty easy to ‘turn on’ when I go into the booth, so I don’t even really think about it that much anymore.

M: A lot has changed in five years, both in terms of how the show is made and for your character in particular. Can you elaborate a bit on the different ways you play the Wash we see in the Recollection trilogy versus the Wash in the Freelancer flashbacks?

SM: I’ll be honest, if you see any difference in the way my voice sounds between the Recollection stuff and the Freelancer seasons, I’m a better actor than I think I am. I think the key is really in the writing. Recollection Wash was written way more hardass than Freelancer Wash, and I just played it that way. Freelancer Wash is a lot lighter, both in the flashbacks but also in the ‘current day’ stuff, and I play him accordingly. It’s really all there in the writing, and I don’t have to think too much about how to play the tone, ‘cause Burnie and the guys have given me a lot to work with. That’s probably not all that insightful as far as my process goes--I’m an improviser, so a lot of these things I’m able to dredge up without a lot of conscious thought.

M: Have you been involved in the motion capture process for seasons nine and ten? Is it easier or more difficult to get in-character when you are providing movements as well as voice?

SM: You're gonna love this one. I have done precisely one motion capture scene, and it was kind of an accident, a lark. My theater company was rehearsing a play we did last year in the RoosterTeeth studio, and as the producer I came down one night to watch how the rehearsals were going. It was late at night, and as usual, Monty was there working. He asked me if I wanted to do the mo-cap for Wash since I was there and that’s what he working on. As far as the mo-cap acting goes, it wasn’t much, but it turned out to be kind of an iconic scene--the Wash/CT “the ball got dropped/don’t called me Connie” scene. That’s me as Wash in that scene. Mostly standing around, gesturing as Wash talks. Nothing fancy.

I would say that I’m pretty animated in the voice over booth. Not like being a spaz or anything, but as an actor I work pretty physically, and if Wash is tense, I need to tense up my body, if he’s supposed to be fighting, I’ll move around like I’m boxing, whatever.

M: In the flashbacks Wash plays off of the other Freelancers a lot. Do you record with other members of the cast, or separately?

SM: We all record separately. It’s really nice when the released episodes come out so I can hear how, say, me and Shana, or me and Jen Brown, or whomever, sound together. Wash didn’t do much in this last episode, episode 11, but I really liked it because I felt Jen and I sounded really natural together, even though those lines were recorded possibly weeks apart. 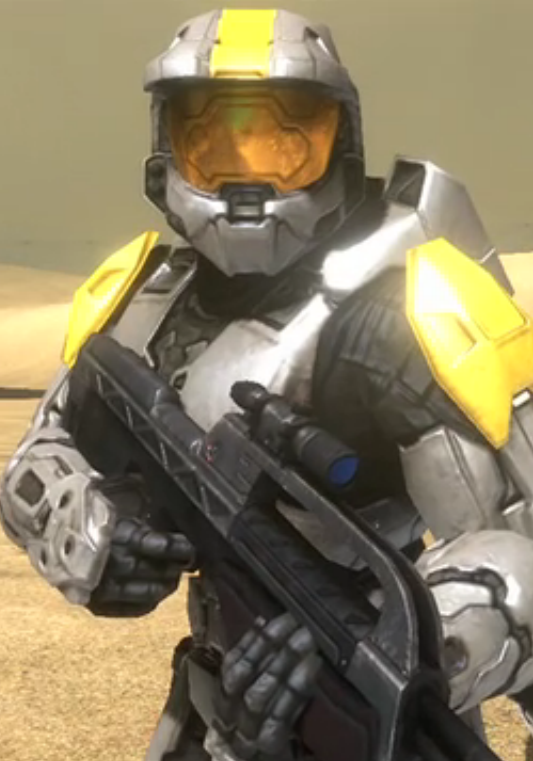 M: How do you feel that Wash himself has changed between episode ten of season ten and the beginning of Recovery One?

SM: Wash is a lot more chill. He’s obviously had a lot of stuff thrown at him, but he’s a survivor. A bend don’t break kind of dude, and I think his exasperated but still kindly attitude toward the Reds and Blues now is a sign of how he’s grown.

M: What was a particularly memorable episode to make?

SM: Hmmm, sometimes I’m in multiple times covering lines that go into a particular episode, so they all kind of blur together. Ones that stick out are some of the memory is the key scenes with Church, the EMP scene, Wash on the giant iceberg, the flamethrower dude fight scene from last year. The single most memorable recording session, though, is the last one I did with Matt for season nine. We were trying to wrap up all of Wash for the season, and it was longer than usual. It got a LOT longer than usual when at the end of the session Matt went to save an hour of VO work and the sound file disappeared into the ether. We had to do all of it all over again. I’m sure there were some great Wash lines in that first set that no one will ever, ever hear now because they vanished. We’re pretty careful now to save a lot more frequently when we do big long sessions.

M: You’ve obviously got talent as an improv comedian: how much, if any, of Wash’s dialogue is improvised?

SM: Less than you might think, but then again a lot of Wash’s iconic lines have been ad libs, or semi-ab libs. Worst throw ever, 'why do cars hate me', 'it bounces', 'that guy was a dick', etc, all have been ab-libs to varying degrees. A lot of times, the guys will give me a general direction--say something about cars hating you, and we’ll run through 5 or 6 different ideas; some of them are all me, some of them include suggestions of how to deliver the line or specific words from Matt or Burnie. Sometimes we try to fit in jokes that don’t really end up working. It’s all pretty collaborative.

M: If you could play any character in Red vs Blue besides Wash, who would it be?

SM: Without a doubt, Caboose. He’s hilarious and probably my favorite character in the show. Plus, as Jen Brown can attest, I do a pretty decent Caboose impersonation. Second would be Sarge. He’s probably my second favorite, and I do a decent Sarge as well.

M: You’ve experienced fandom a lot, through conventions and now recently finding a vocal Red vs Blue fandom on tumblr. Do you consider yourself a fan of any other show or game?

SM: Well, I LIKE a lot things. Adventure Time probably foremost right now on the silly fun end of things, Game of Thrones on the more adult end of things. Growing up I was a huge sci-fi kid, giant Star Wars fan, and I still stay current by watching Clone Wars with my son and playing the various Lego Star Wars games. But I’ve never really been involved in a fan community in the way some of you guys are. I’ve known people who have been, but it’s been a long time since I have and I had kind of forgotten how immersive and passionate fan communities can be. I’ll be honest, it’s pretty weird being the object of some of that devotion. Like I’ve said before, I’m just a dude, you know.

M: Are you a gamer? If so, name some favorite games.
SM: Not really a huge gamer, but since I’ve been involved with RvB I’ve tried to stay more current. Favorite games for me are Braid, Okami, the A Boy and His Blob remake. In general I like platformers and puzzle games over shooters. I like casual iPhone games as well. But here’s a dirty little secret--I don’t own an XBox. 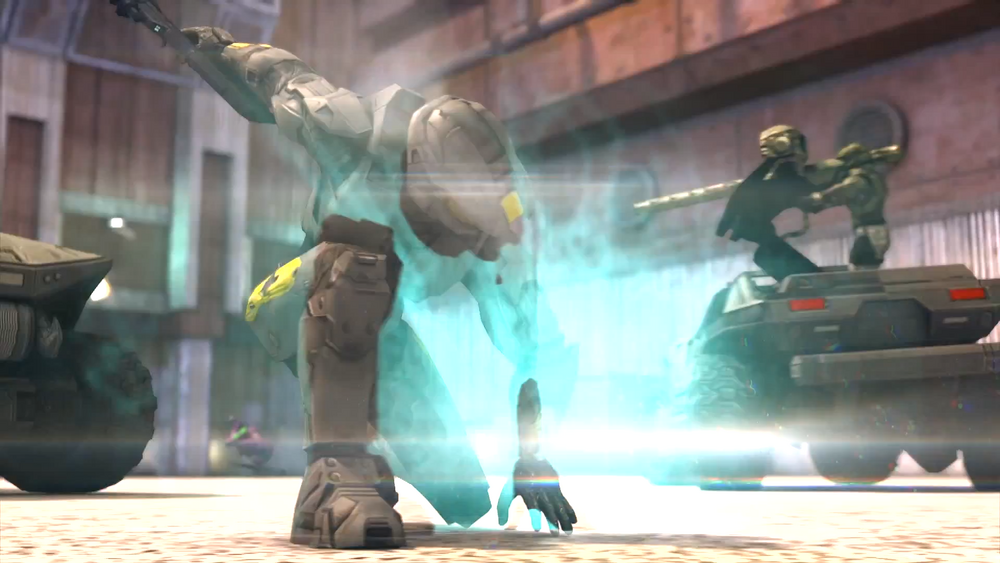 M: If you could play any character outside Red vs Blue, who would it be?

SM: I’d love to be involved in Adventure Time or Game of Thrones, but I’d much rather be a new character or one not yet cast. If the live action Star Wars series ever gets off the air, I’d love to play a Jedi. I’m already bald, I can do it!

M: Here’s a question digging a bit into the past: at the end of season eight, Wash was injured and facing the Meta. He started to say “I can’t believe...” but never finished the sentence, and I’ve always wondered what was supposed to come after. Do you know? Was that something you discussed with Burnie?

SM: Ha, I have no idea! He may have told me, he may not have. Things change too, so even if there was some idea originally, it may not be operative anymore.

I’ll give you an example of what I mean, and tease you a little more. I know the identity of the Blue Freelancer. But that identity has changed a couple of times internally over the past couple years, so until it’s out there, everything is fluid. And that’s all I’m gonna say.

Shannon's work can be found at RoosterTeeth. If any of you out there make casting decisions for Star Wars, give him a call.

Email ThisBlogThis!Share to TwitterShare to FacebookShare to Pinterest
Labels: interviews, Red vs Blue