This week I picked up Darth Maul: Death Sentence and noticed The Clone Wars: The Sith Hunters on the shelf too, so it's a Darth Maul double feature this week. Both are quite entertaining: The Sith Hunters starts off immediately where season four of The Clone Wars ended, and the characterization in both books pretty much matches what we've seen on the show. That means that I'm not completely happy with it, but with some more space in which to move the books start on a road that explores that characterization. Further issues of Death Sentence, penned by the witty Tom Taylor, will presumably follow that trend. Death Sentence #2 is available today, August 29.

These reviews may contain spoilers for both comics as well as Invasion.

The comic: The Clone Wars: The Sith Hunters 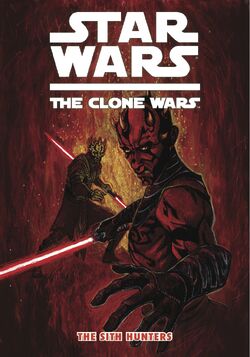 The story: Maul's post-The Phantom Menace backstory is revealed in between a plot about Maul and Savage trying to find a place to live. The Jedi are tracking them all the way.

The art: Maul looks more like Ray Park in some scenes than he does in The Clone Wars, but a lot of the art feels cursory. Detail gets lost in background scenes. Except for some silly character design - a shirtless Jedi who specializes in martial arts seems out of place - the action scenes are entertaining and easy to follow.

The female characters: The Sith Hunters introduces the heir of the Kozinargh trade guild, who at the time of writing seems to be unnamed. The Sith brothers happen to rescue her from a cell, and Darth Maul thinks that her family's fortune is a good enough reason to keep her alive. She's not exactly a MacGuffin, but lack of dialogue at key points means that it's hard to see her as a character with her own motivation either. Her desire to regain her family fortune from her brother regardless of whether it takes his death seems to indicate a vicious (or at least pragmatic) streak - she mourns over her dead pet but is not shown reacting to her brother's body. Afterward, though, she remains almost silent, offering help to the Jedi as easily as to the Sith. She could be frightened into silence, caught between all these Force users, but we don't really know.

The immediate chronological tie to The Clone Wars means we get to see some more of Asajj Ventress and details some of her awkward spaceship ride with Obi-Wan. They're very in-character, which of course means bantering, and she walks away with an insistence that she isn't on anybody's side.

How it came to my attention: Tom Taylor, the writer, has a great feel for Maul and also a Twitter account.

The story: The Zabrak brothers just want to hang out in a bar, but someone's put a price on their heads. As they try to figure out who, the Jedi do the same in order to track the Sith down.

Issue one is largely a long chase scene, while issue two settles into the characters and introduces an intriguing prophecy as well as questions about how Maul is feeling. He seems to have an inner struggle: being driven mad for a while can do that to a guy. It's all wrapped up in his feelings of vengeance for Obi-Wan, and I'm very curious to see how it all plays out.

The dialogue is is snappy ("He lacks focus like you lack legs,") and suspicions are raised in subtle ways. There are a couple characters who are nicely morally gray.

The art: Much richer than in The Sith Hunters, with some notable Jedi designs. One Master has a sideswept haircut that her enthusiastic Padawan replicates, and both characters have a lot of warmth: I recommend not looking them up on Wookieepedia if you like happy endings.

The art is earthier than in Duursema's comics, and some scenes are beautifully surreal. Visions gain earth tones instead of feeling wispy.

The female characters: See above. Salmara is a friendly Jedi Master who doesn't have a lot of characterization yet but has a very distinct look.

The characterization: The Zabrak brothers were characterized much the same in both books. They don't seem particularly chummy, and use a ritualized form of address, mostly calling each other "brother". The stories continue to use Maul's characterization as set in The Clone Wars. I wrote previously that I don't think this fits the sense I got from him in The Phantom Menace, but seems to simply be the way things are.

In The Sith Hunters Savage learns some patience, which he then reminds Maul to use too. Maul doesn't need the advice very much. The only thing that will prevent Maul from thinking about a fight before he jumps into it - or creates a scenario in which he can jump into it -  is the appearance of Obi-Wan, which makes sense when the Jedi, you now, killed a man obsessed with revenge. Obi-Wan is still Maul's single greatest rival, but Maul is not single-minded. His interactions with the woman in The Sith Hunters and the catlike aliens in Death Sentence show that he's liable to manhandle potential allies, but leave them alive.

Savage is clearly the more rash of the two, still brutish and fueled by his transformation. Killing is his first, not last, plan of action. I would like some mention of Feral Oppress, but am not sure it's going to happen.

Maul is clearly the smarter of the two brothers, but smarter in this case tends to come off as 'makes more convoluted plans' instead of the focus he exhibited in The Phantom Menace.  Both comics have illustrations that explained more about Maul's story, namely how he got from Naboo to Lotho Minor and how he became a spider. All the pieces are present, but don't quite fit together: his organic-looking legs make for some of The Sith Hunters' best images but just don't look like the same thing we saw in The Clone Wars. Both comics show his injury in different ways, and both are creepy in a manner that fits the Sith.

Their fierce appearances make the comics fun to look at, and if Death Sentence #2 is any indication of how the rest of the four-part series is going, the comics aren't just going to appeal to people who like art and carnage. It looks like there will be rewarding Jedi characterizations and a Return of the Jedi-style plot of wronged indigenes as well. I look forward to the rest of the series, as well as the continuation of the story of The Sith Hunters in The Clone Wars.
Posted by Megan at 2:46 PM